Benefits seen but no clear, long-term advantages to binocular gaming over patching

In the first study, 385 children between 5 and 13 years of age were randomly assigned to a gaming group or an eye patching group. Improvement in visual acuity was measured by gains on a standard eye chart, with follow-ups at four, eight, 12 and 16 weeks. Both groups showed small improvements over the period, especially younger children who had not been treated for amblyopia before. Overall, two hours a day of patching worked slightly better than an hour a day of game play.

In the second study, 28 children from ages 4 to 10 were randomly assigned to one of two groups. For two weeks, children in one group played computer games an hour a day five days a week. Those in the other group wore patches two hours a day for two weeks. After that, all the children played games for 14 days. After the first two weeks, children in the gaming group had improved 1.5 lines on the eye chart, more than double the improvement among children who wore patches. At four weeks, there was no difference between the two groups. 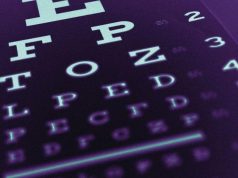