THURSDAY, June 30, 2016 (HealthDay News) — The experimental drug midostaurin may reverse organ damage in patients with advanced systemic mastocytosis, according to a study published in the June 30 issue of the New England Journal of Medicine.

Jason Gotlib, M.D., an associate professor of medicine-hematology at the Stanford University School of Medicine in California, and colleagues at 29 medical centers around the world recruited 116 patients with advanced systemic mastocytosis, including mast-cell leukemia. All of the patients received midostaurin.

Eighteen percent of the patients had mast-cell leukemia. They typically survived for 9.4 months, whereas the usual life expectancy is less than six months, Gotlib told HealthDay. Across the whole study group, patients typically lived for almost 2.5 years. He said future studies should try combining midostaurin with other treatments, including bone marrow transplants, which have shown promise in recent research.

Novartis, which is developing midostaurin, partially funded the study. 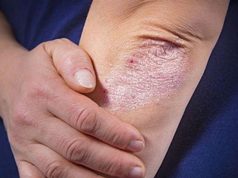