Home Neurology Hunger Signals Differ in Brains of Those With Anorexia

THURSDAY, March 26, 2015 (HealthDay News) — People with anorexia nervosa have an abnormal brain response to hunger signals, according to a new study. The findings were published in the April 1 issue of Biological Psychiatry.

“When most people are hungry, they are motivated to eat,” study first author Christina Wierenga, Ph.D., an associate professor of psychiatry at the University of California San Diego School of Medicine, said in a university news release. “Yet individuals with anorexia can be hungry and still restrict their food intake. We wanted to identify brain mechanisms that may contribute to their ability to ignore rewards, like food,” she explained.

For the study, the researchers analyzed brain function in 23 women who had recovered from anorexia and 17 healthy women who never had the eating disorder. The women recovered from anorexia “showed decreased response to reward, even when hungry. This is opposite of healthy women without an eating disorder, who showed greater sensitivity to rewards when hungry,” Wierenga said.

“Our study suggests that brain circuitry differences in anorexics make them less sensitive to reward and the motivational drive of hunger. Put another way, hunger does not motivate them to eat,” study senior author Walter Kaye, M.D., director of the Eating Disorders Treatment and Research Program at the university, said in the news release. Kaye also noted that the researchers saw differences in areas of the brain that are important for self-control in those who had recovered from anorexia. That means people with anorexia may have greater self-control than people who don’t have the eating disorder, according to Kaye. 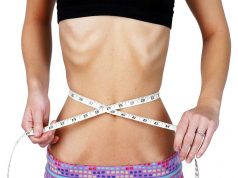