MONDAY, Feb. 15, 2016 (HealthDay News) — Dermoscopy can differentiate staphylococcal scalded skin syndrome (SSSS) from toxic epidermal necrolysis (TEN), according to a letter to the editor published online Feb. 4 in the Journal of Dermatology.

Kazuya Miyashita, from the Nara Medical University School of Medicine in Kashihara, Japan, and colleagues describe the case of a 77-year-old man with SSSS. The patient presented with subcutaneous masses in the right groin arising from the lymph nodes, which were diagnosed as diffuse large B-cell lymphoma.

The authors note that the patient was administered celecoxib due to pain at the biopsy site at day seven after biopsy. Five days later he was hospitalized with a fever and erythroderma. After the skin lesions extended to all over the body, followed by exfoliation, he was suspected to have TEN. A fresh exfoliation site on the trunk, which still had an epidermis with less leachate, was identified with dermoscopy, indicating subcorneal detachment. A skin biopsy revealed subcorneal cleavage without epidermal necrosis, which was consistent with late SSSS, but not TEN. Methicillin-susceptible Staphylococcus aureus was isolated from turbid adipose tissue around the inguinal lymph node. Intravenous administration of vancomycin hydrochloride and meropenem hydrate was started on the day of admission; seven days later the patient had recovered and had improved skin findings.

“We suggest dermoscopy as a tool for quickly diagnosing SSSS and enabling the faster initiation of appropriate therapies,” the authors write. 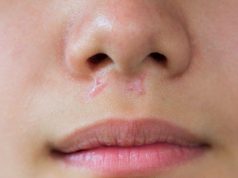