MONDAY, Nov. 28, 2016 (HealthDay News) — For men with prostate cancer, use of androgen deprivation therapy (ADT) seems not to be associated with dementia, according to a study published online Nov. 21 in the Journal of Clinical Oncology.

Farzin Khosrow-Khavar, Ph.D., from McGill University in Hamilton, Canada, and colleagues examined whether use of ADT is associated with increased risk of dementia, including Alzheimer’s disease. A cohort of 30,903 men newly diagnosed with nonmetastatic prostate cancer from April 1, 1988, to April 30, 2015 were recruited and followed until April 30, 2016. To account for delays associated with dementia diagnosis and minimize reverse causality, ADT exposure was lagged by one year.

The researchers found that 799 patients were newly diagnosed with dementia during a mean follow-up of 4.3 years (incidence, 6.0 per 1,000 person-years). ADT use was not associated with increased risk of dementia compared with nonuse (incidence, 7.4 versus 4.4 per 1,000 person-years; adjusted hazard ratio, 1.02; 95 percent confidence interval, 0.87 to 1.19). Cumulative duration of use and no single type of ADT correlated with increased risk of dementia in secondary analyses.

“In this population-based study, the use of ADT was not associated with an increased risk of dementia,” the authors write. “Additional studies in different settings are needed to confirm these findings.” 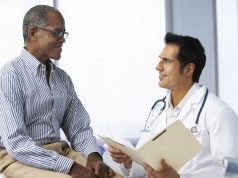 Response to Radiotherapy for Prostate Cancer Better in Black Men